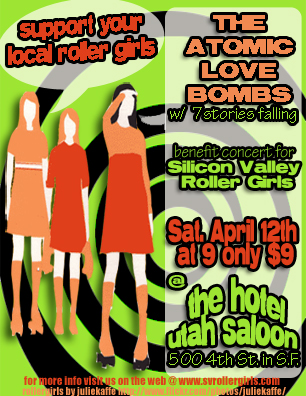 The Atomic Love Bombs have exploded upon the music scene like, well, an atomic bomb. Made up of former members of established West Coast psychedelic and 60s garage rock-inspired bands including Jello Moon Shot, The Smile Experiment, My Cousin Mary, and The Daisy Chainsaw Massacre, The Atomic Love Bombs have definitely paid their dues over the past 10 years. They are a rock band’s rock band with a serious arsenal of psych-pop-garage hooks, meshed with inspiring melodies and lyrics that leave their audiences begging for more. Ash Townsend fronts the band with vocals and swagger, while the haunting guitar interplay of Michael Schifano, Bryan Chaffin, and Joe Mitch is inventive and adds a unique blend of melody and noise to each song. The rave-up rhythm section of Tim Rye and Mike McCaffery rounds out the band.

“Like a cross between Jefferson Airplane and X…”
Bill Donohue, PSM

The Silicon Valley Roller Girls, a non-profit womens' flat track roller derby league based in the south bay will be making an appearance with our now infamous Wheel of Misfortune, spankings, and other derby treats!

Proceeds from this show benefit the Silicon Valley Roller Girls and will help finance pratice time, uniforms and upcoming bouts in the Bay Area.

Also playing: 7 Stories Falling and Dirty Dave and the Deviants