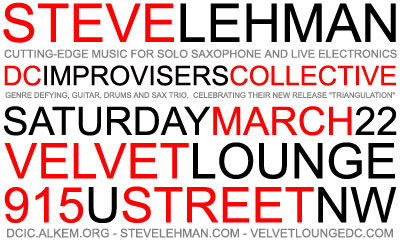 Steve Lehman will present a set of cutting-edge music for solo
saxophone and live electronics, including selected compositions from his new
quintet record “On Meaning” (Pi, 2007) which have been meticulously
re-arranged for an electro-acoustic format. Incorporating detailed
programming and real-time processing, Lehman creates computer-driven
environments for improvisation that the New York Times describes as "an extensive
language."

Named a Rising Star on the alto saxophone in 2006 and 2007 by the
Downbeat Magazine International Critics Poll, Steve Lehman is a saxophonist
and composer whose work resides on the cutting-edge of contemporary
music. He has been recognized as one of today’s truly original creative
voices by The Wire, The New York Times, The Village Voice, and Downbeat
Magazine, as well as by National Public Radio. A former student of both
Jackie McLean and Anthony Braxton, he has performed and recorded
throughout the United States and Europe with his own ensembles, and with
those led by Anthony Braxton, Dave Burrell, Mark Dresser, Vijay Iyer,
Oliver Lake, and Meshell Ndegeocello.

An award-winning composer, Lehman’s pieces for large orchestra and
chamber ensembles have been performed by the Janacek Philharmonic, members
of Ensemble 21 and Ensemble Sospeso, and by the pianist Marilyn Nonken.
His music has received performances at the MusikTriennale Festival in
Koln, the Ostrava New Music Days, The Kaleidophon Festival in
Ulrichsberg, the Festival International de Musique Actuelle in Victoriaville,
Dance Theater Workshop and the Interpretations Series at Merkin Hall,
both in New York City. Lehman’s recent electro-acoustic music has focused
on the development of computer-driven models for improvisation, based
in the Max/MSP programming environment.

More about “On Meaning”: http://pirecordings.com/pi25/

The DC Improvisers Collective (DCIC) is a trio exploring the
intersection of jazz, contemporary composition and rock music. Their current
lineup features Ben Azzara (drums), Jonathan Matis (guitar), and Mike
Sebastian (reeds). These musicians come together from diverse backgrounds,
bringing experience from performing in rock bands and jazz groups, as
well as post-classical composition. Drawing on the visceral energy and
immediacy of rock music, along with the spontaneous creativity and
subtlety of the jazz tradition, DCIC is able to forge new music that
possesses both great intensity and mindful nuance.

DCIC is celebrating the release of their first studio album,
“Triangulation” (Improv Arts, 2008).
While the official release date is not until April 1, copies will be
available at the show.

The music of DCIC has found receptive ears in the rock world, for
example they performed several concerts during 2007 as the backing band for
Joe Lally (of Fugazi). DCIC also finds themselves rooted firmly in the
jazz world; they have performed alongside many of the nation's
cutting-edge improvising musicians as well as performing with Blue Note
recording artist Greg Osby.