“I learned to drive in order to read Los Angeles in the original” -Reyner Banham, Architecture of Four Ecologies 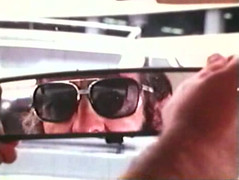 This new Esotouric bus adventure begins downtown and works its way south through Vernon, Bell Gardens, Santa Fe Springs and Downey, and through the past two centuries, exploring some of L.A.'s seldom-seen gems. Turning the West Side-centric notion of an L.A. architecture tour on its head—just like Banham's book did for the historical monograph – the bus goes into areas not traditionally associated with the important, beautiful or significant, raising issues of preservation, adaptive reuse and the evolution of the city. The locations all speak to the power, mutability and reach of the Southern California Dream. Some of the tour stops are:

Pueblo del Rio (1942), the first African-American housing development in LA, is a fascinating public project designed by Paul Williams and Richard Neutra, among others. Its application of the International Style and mass-produced pre-fab methods to the needs of the growing Southern California population leaves room for considerable dialogue.


The Gage Mansion (1808). The oldest adobe structure in Los Angeles County, this fascinating home sits smack dab in the middle of a 65-year-old trailer park on the banks of the Rio Hondo River in Bell Gardens. Between the layers of context at this site is the history of migration and growth in the Southland, from Spanish land grants to the dust bowl to the vast waves of stucco suburbs.


The Bradbury Building (1893). A favorite of Banham's, this structure, the oldest surviving commercial building in the historic core, with its delicate ironwork and astonishing atrium, represents a feature of each Banham book: a structure that uses the builder's ingenuity and the uniqueness of its setting to make something utterly of its time and place.


The Downey Space Plant (1929-present). It began as airplane factory carved out of a castor bean field and grew to be the hub of North American Aerospace development, before being sold off in pieces in the early 2000s. Currently it's a motion picture sound stage. Is the only long-term solution for this awe-inspiring, 160-acre space a vertically-integrated condominium and retail development?


East Los Angeles Train Station (1932). A prominent location in the 1946 film "The Postman Always Rings Twice," it was built to deal with congestion and overcrowding in the existing downtown terminals. Currently a picturesque Mission-style ruin in the shadow of the wacky Citadel shopping center, will it rise again as the rail lines reassert themselves?


No other city has so fascinated architecture critics and scholars of urban and cultural studies than L.A., that sprawling, self-referential zone of mystery and glamour. British writer Reyner Banham was the first to love Los Angeles for what she was, her ugliness as well as her beauty. In the early 1970s he abandoned his academic preconceptions to revel in this city of freeways, foothills, beaches and suburbs, built on mobility and flux by a series of invaders. Along the way, he discovered extraordinary spaces in neighborhoods that were often overlooked for being too remote, too industrial, or simply occupying invisible "flyover country" beneath the great L.A. freeways.


In this city on the edge of the western dream, nothing was like what came before. Status was no longer communicated through the construction of stone palaces that looked like they fought every step of the journey over the Rocky Mountains, but rather by freeway access and wacky drive-thrus, light, ventilation, organic design and a sensitivity to a built environment— commercial and architectural innovations which would have been unthinkable anywhere and anytime else.

Gone was the unified vision of a city, and yet there was a method to L.A.'s madness. What Banham saw was something far more complicated: behind this urban sprawl was a pattern, almost a language, which could not be understood through old modes of architectural and urban criticism, but which had to be viewed through the organic facts of its own ecologies.

Esotouric guides Richard Schave, Nathan Marsak and Kim Cooper all studied under Banham as undergraduates at UCSC, and each was deeply influenced by his work. In Fall 2007, we launch "Reyner Banham Loves Los Angeles" in tribute to our late professor, who showed us our native Southern California through fresh eyes.

ABOUT REYNER BANHAM: Reyner Banham(1922-1988) was a prolific architectural critic best known for "Theory and Design in the First Machine Age" (1960) and "Los Angeles: The Architecture of Four Ecologies" (1971). Professor Banham taught at the University of London, SUNY Buffalo and the University of California, Santa Cruz, where he was Chair of the Art History Department.