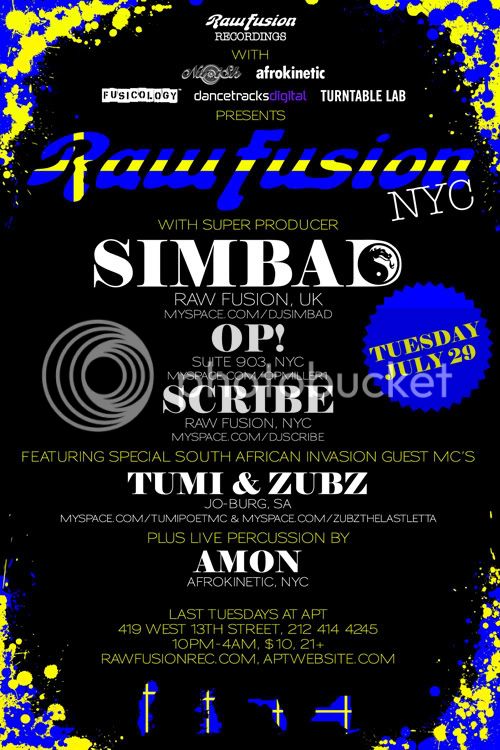 Since it's humble and auspicious beginnings in 1996 in Stockholm, Sweden, the Raw Fusion party has always been about the music and the dancing, the music being primarily African-American (House, Hip-Hop, Disco, Soul, Jazz), and Afro-European (Broken Beat, Drum & Bass, Nu Jazz) dj-era dance music. The Raw Fusion party first appeared on this side of the Atlantic in 2006, with the establishment of sold-out annual Winter Music Conference parties in Miami, three years running. 2008 has already seen the launch of a London arm, and now, New York. Kicking things off with a boom, the nyc launch features one of the baddest men on the decks, and in the studio, uk superproducer and Raw Fusion recording artist, Simbad. Simbad is also resident dj of the London party, and has thrown down unforgettable sets at the last two Miami parties. He's joined on the decks by hometown favorites OP! and Scribe. Performing live are two of South Africa's most dynamic young mc's, Tumi and Zubz, both joining us from Johannesburg. And topping things off, a regular fixture of the Afrokinetic and Raw Fusion Miami parties, and ubiquitous in the dance party scene, we have Amon rocking live on percussion. Serendipitously timed with an imminent and much needed expansion of APT's dance floor, Raw Fusion promises to please, and to stick around until they make dancing illegal (again).