EDIT: OK, I forgot that I was working the Weiden Kennedy table at the Rosey Awards with Kristin Wall. I'll still be there, but it will start more like 8ish and go on until whenever it dies out. If you get there earlier, I'm sure you can have a good time eating waffles, drinking beers, looking at art and hanging out with others.

There is an evite. I don’t know how to link to it. You don’t have to RSVP, but can if you want. Just go to evite and search PDX Bones and you’ll find it. Wait, just tried and I am wrong. Well, if you aren’t on that 300+ invite list, then here is your invite and info from the invite: 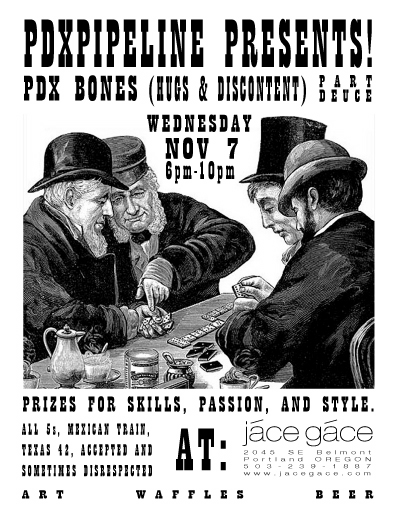 This is the second in PDX PIPELINE’s (pdxpipeline.com) series of Domino Clubs/Socials. They occur on the first Wednesday of every month. Many cities and peoples around the world regularly play in domino clubs and tournaments. This is the only known one in Portland.

We will have people playing all 5s, Mexican Train, and Texas 42. We have many sets of dominoes, but you can bring your own–hopefully not marked

The event is FREE. We give away prizes based on no certain criteria except randomness.

YOU DO NOT NEED TO KNOW HOW TO PLAY, we will show.
YOU DON’T HAVE TO PLAY, there will still be art, music, beer, waffles, and video happening…and just socializing

At the last event, we taught several people. At this one, there will be many people who can teach and play. It is a club, not a tournament.

Jace Gace will also be projecting various film clips, domino scores (I’ve lost a couple times), music videos, and possibly myself playing the Dominologist–beat him once.

This is about fun, and I hope you will come have fun with us.

Added by WorldPipeline on November 6, 2007