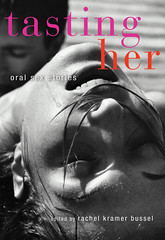 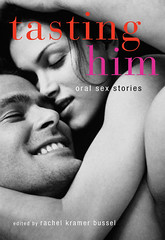 Celebrate the joys of giving and receiving-—head, that is-—with the first Oral Sex Night at In The Flesh Reading Series, featuring readings from host Rachel Kramer Bussel’s latest anthologies, Tasting Him and Tasting Her. Readers including Tasting Him and Her contributors Tish Andersen, Heidi Champa, Emerald, Tsaurah Litzky, Michelle Robinson and Donna George Storey (author of erotic novel Amorous Woman) as well as Daniel Maurer (author of Brocabulary) and Fiona Zedde (author of Hungry for It and A Taste for Sin, among others), who will also read oral sex-themed work. Books will be available for sale and signing. Hosted and curated by Rachel Kramer Bussel. Free candy and cupcakes will be served. For more information about Tasting Him and Tasting Her, visit http://tastinghim.wordpress.com and http://tastingher.wordpress.com.

Tish Andersen (a pseudonym for this shy erotica-lover) was born in the South but now lives north of the Mason-Dixon line: New York City’s East Village/Lower East Side, to be precise. She spends the bulk of her time reading, writing, editing, taking pictures and managing the subsequent—and dreaded—postproduction work. She’s most comfortable behind a lens, focusing on the fabulous freaky folks that surround her. A fan of all things naughty, Tish is a kinky voyeur and a shameless romantic.

Heidi Champa is a typical last-born child. Snarky, attention-seeking and rebellious, she chooses to write dirty stories to keep herself out of real trouble. Her work appears in the anthologies Tasting Him: Oral Sex Stories and Frenzy: 60 Stories of Sudden Sex. She has steamed up the pages of Bust Magazine and if you prefer your erotica in electronic form, she can be found online at Oysters and Chocolate and The Erotic Woman. In addition to her flare with the written word, she knows every last sentence of the movie Clue by heart. When she’s not writing, she can be found reading or filling her iPod with more music. She lives in Pennsylvania with her husband. Her greatest wish is that her sarcasm would translate better in the written form.
heidichampa.blogspot.com

Daniel Maurer is a nightlife editor at New York Magazine, where he also co-edits the food blog Grub Street, winner of a James Beard Award, a MIN Award, and nominated for a National Magazine Award. He is the author of Brocabulary: A new Man-i-festo of Dude Talk. He has appeared on television (WNBC’s “Today in New York”) and in a New York Times feature. He was nominated as a New York “hottie” by Gawker, a blog to which he has also contributed (he coined the term “Douché,” which won the Gawker T-Shirt Contest). His freelance journalism has appeared in the New York Times, Nerve.com, Un Chin magazine, Modern Drunkard magazine, McSweeney’s, Shecky’s Nightlife Guide, and the Metro newspaper. Daniel’s alter ego “Mosca” (”The Fly”) has appeared in newspapers and on national television as a world-ranked competitive eater. His personal best is 24.5 soft-shell tacos in 12 minutes.

Michelle Robinson’s erotic short story “Mi Destino” is included in the New York Times bestseller Caramel Flava. Michelle is also a contributing author to the anthology collections Succulent: Chocolate Flava II with the story “The Quiet Room,” Asian Spice with the story “The Flow of Qi” and Missionary No More: Purple Panties 2 with the story “Hailey's Orgasmic Splendor.” She has recently completed work on four novels, Color Me Grey, Pleasure Principle, Serial Typical and You Created a Monster, and is currently working on the screenplay adaptation of “Mi Destino.” Michelle can be reached at [email protected] as well as on www.myspace.com/justef.

Fiona Zedde is a transplanted Jamaican currently living and working in Atlanta, Georgia. Her work has been published in various anthologies including Best Lesbian Erotica 2004 and 2007, Wicked: Sexy Tales of Legendary Lovers, and Best Lesbian Romance. She is also the author of four novels, the Lambda Literary Award finalists Bliss and Every Dark Desire, as well as A Taste of Sin and Hungry for It. Her novellas, "Pure Pleasure," "Going Wild" and the soon-to-be-published "Sweat" appear in the collections, Satisfy Me, Satisfy Me Again, and Satisfy Me Tonight, respectively. Readers and voyeurs can find out more at www.fionazedde.com.

Added by rachelkramerbussel on August 25, 2008