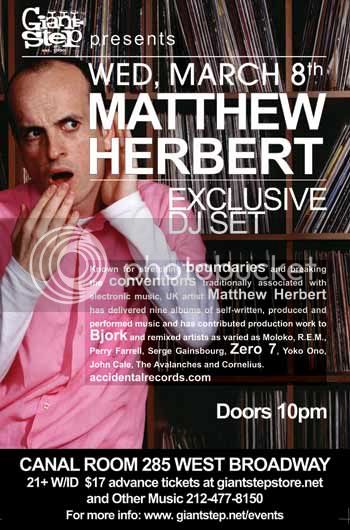 Matthew Herbert is an established musician and producer, known for
stretching boundaries and breaking the conventions traditionally associated
with electronic music. He is one of the few independently minded artists to
have made a considerable impact on both media and public whilst striving to
be innovative and experimental. Along with nine albums of self-written,
produced and performed music, he has contributed production work to Bjork's
Vespertine album and remixed artists as varied as Moloko, R.E.M., Perry
Farrell (Jane's Addiction), Serge Gainsbourg, Zero 7, Yoko Ono, John Cale,
The Avalanches and Cornelius.