Thank's to all who came out to support our efforts @ LoveFest and the underground party that followed. Both events were truly awesome!! Now back to our regularly scheduled programming. The lineup this month is very solid so come on down for a little LoveFest decompression. 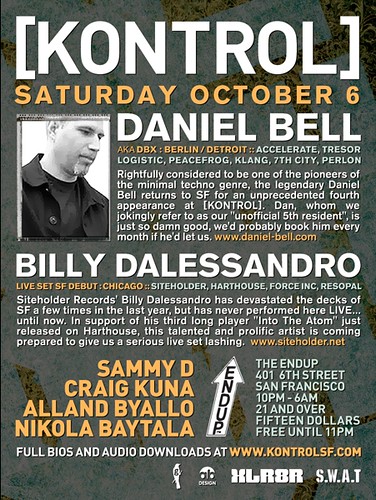 featuring from Detroit via Berlin:

Rightfully considered to be one of the pioneers of the minimal techno
genre, the legendary Daniel Bell returns to SF for an unprecedented
fourth appearance at [KONTROL]. Dan, whom we jokingly refer to as our
"unofficial 5th resident", is just so damn good, we'd probably book
him every month if he'd let us.

SiteHolder Records' Billy Dallessandro has devastated the decks of SF
a few times in the last year, but he's never played here LIVE... until
now. In support of his third long player "Into The Atom" just released
on Harthouse, this talented and prolific artist is coming prepared to
give us a serious live set lashing

Born in Sacramento, California, Daniel Bell grew up outside of
Toronto, Canada, and then moved to Detroit where he collaborated with
Richie Hawtin as Cybersonik for three years on Plus 8 Records. In
1991, he started his own label, Accelerate, on which he released his
influential releases as DBX. Based on nearby Chicago "track" records,
he reduced that sound further into funky, streamlined grooves. The
formula proved to be successful and helped launch a new aesthetic in
techno and house music known as "minimal".

With the overwhelming success of his "Losing Control" single in 1994,
Daniel set up 7th City Distribution in order to assist smaller Midwest
labels to get distribution in overseas markets. He also created three
new labels - 7th City, Elevate and Harmonie Park. In 2000, he
relocated to Berlin, Germany, and released his first mix CD, "The
Button-Down Mind of Daniel Bell", on Tresor Records, followed in 2003
by "The Button-Down Mind Strikes Back!" He since has produced a series
of remixes for a diverse range of artists, includng John Tejada,
Pantytec, Akufen and John Thomas. He has spent the last 3 years
traveling and DJing around the world.

Dan is playing a grand total of five gigs in North America in 2007.
We are truly honored to be able to say two of them are for us. To be
honest, we'll pretty much book this guy anytime he's available...he's
just that good! His last appearance in January (with Matthew
Dear/Audion live) was probably the craziest any of us had EVER seen
the Endup. What's in store this time? I guess we'll have to find out.

Chicago native Billy Dalessandro first brought his unique production
style to the forefront of the electronic music community in 2002. The
five years since then have seen him release two full length albums,
nearly 20 original EPs, and a slew of remixes. His works have found
their way into the record bags of many respectable DJs, as well as
some of the most prestigious jocks' compilations.

Recently he established his own labels Siteholder and UnCut with
friends Brian Ffar and Daniel Mnookin which have already gained
massive feedback on each of the 7 releases. Standouts include "Don`t
Sleep" on SH001 and "That Trick She Knows" on SH002, both of which
were charted and played by many top DJs. His latest release
"Blackjack" on Sonicutlure 006 is a jacking dancefloor bomb.

Billy will be in Europe from mid October to early December in support
of his just-released LP on Harthouse, after which he'll make stops in
select US cities. "Into the Atom", Dalessandro's third full length
album, takes listeners on a voyage into the bits and pieces of what
separates the average tracks from the very best. Similar to the role
an atom plays in the molecular build up of all things on this planet,
the release exemplifies the minute twists and turns Dalessandro takes
with his music that help define him as among the true artists in the
production field. It separates those who build the bandwagon from
those who wait until its completion to hop aboard. Billy undeniably
belongs to the former of the two.