featuring from Berlin:
BRUNO PRONSATO : live pa
( Hello?Repeat . Orac . Telegraph . Perlon . Musique Risquee )
Over the last few years Bruno's steady stream of quality releases
on some of the world's most esteemed labels, coupled with his
rigorous international touring schedule, have brought him to the
pinnacle of the experimental techno world. Prepare for a deep and
adventurous musical voyage into the mind of a truly unique artist.


and from Los Angeles:
DRUMCELL : decks + fx
( Droid Behavior . Omniscient )
Founder of Droid Recordings and co-founder of LA's most
respected techno crew Droid Behavior, Drumcell will be showcasing
his energetic and driving take on minimal that has been winning
over crowds and is helping to put LA on the global map.


plus special guest from Minneapolis:
JAMESPATRICK
( Secret Techno . Klikmusik . Vital Vinyl . Microphono )
Minneapolis' minimal honcho and devoted "tesh" (sexy techno)
advocate JamesPatrick has been one of the most important DJs
and promoters in the Midwest for the better part of a decade.
Tonight you'll hear why. 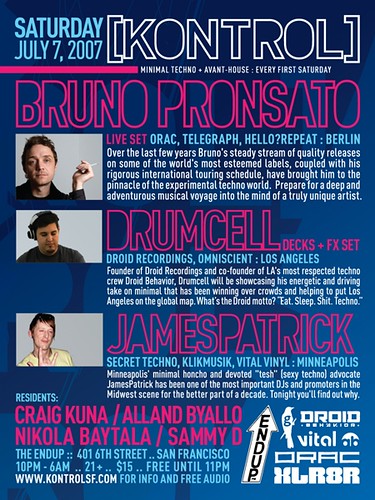 BRUNO PRONSATO
Seattle via Berlin producer Bruno Pronsato (aka Steven Ford) took several giant steps in 2005 toward the peak of the experimental techno mountain. Both on vinyl and onstage, Pronsato kept up a hectic pace of production and performance, catalyzing listeners and crowds in Germany, Switzerland, Turkey, Mexico, throughout the United States, and a triumphant set at Montreal's MUTEK festival. Twelve-inches on esteemed labels like Orac, Musique Risquée, Milnor Modern, Philpot, and Telegraph further elevated his stature and built his international fan base
A sound scientist whose work is equally playful and rigorous, Pronsato deploys a canny use of space and idiosyncratically fashioned rhythms to disorient and build suspense—like some 21st-century Miles Davis or Eric Dolphy of the laptop. Despite being a minimal-techno artist, Pronsato offers a palette that's as full of unexpected patterns and meticulously rendered textures as a Wassily Kandinsky painting.
Pronsato's compositions unsettle in original ways, yet they also slyly tickle funnybones. Often both humorous and erotic, his cuts are the wild cards that adventurous DJs pull out when they want to take the dance floor to strange new levels of motion. Therefore, Pronsato's releases have become elite selectors' secret weapons of beguilingly baffling quirkiness that still move asses.
Unsurprisingly, 2006 is promising to be as eventful as last year. As demand for his music has waxed, Pronsato has accordingly increased his productivity while maintaining his usual exacting quality control standards. March will bring Pronsato's debut 12 for Hello? Repeat while summer 2006 will see EPs issued by Orac and Telegraph (watch for the last two editions of the four-part Limeworks series), plus another collaboration with Argentinean Franco Cinelli for Milnor Modern (Picaro, their first joint effort from late '05, contains some of Pronsato's most flavorful club bangers). A temporary residence in Holland will enable Pronsato to spend even more time in 2006 devastating European audiences with his uniquely psychedelic and funky techno live sets.
Website:
http://www.undosounds.com/


DRUMCELL
Founder of Droid Recordings and co-founder of Droid Behavior, Drumcell (aka Mohamed "Moe" Espinosa) has been one of techno's greatest allies in Southern California in recent times. A graduate of the Musician's Institute and a long-time performer at parties in Southern California, Drumcell has been influenced by music from his earliest years. After being exposed to raves in the early 90s, He grew addicted to the sounds of acid house, techno, in its many forms, and industrial.
It was not long before he was copping turntables to satisfy his vinyl fetish. By the early age of 14 he was playing in various local bands, and through out the rest of his teenage years, cut his teeth-producing hip hop records, dub and various forms of electronic music on Los Angeles based underground labels. By combining his production, DJing and networking skills and focusing in on his more mature musical tastes he soon established himself as one of the major players in LA's growing techno scene.
Associating with the members of Acid Circus to form Droid Behavior as an event production group and record label was the next logical step to raise awareness for techno in the city and to help expose local Artists, established djs, and performers from around the country.
Over the last 5 years Drumcell has rocked parties from big to small on a weekly basis in LA as well as gigs all over the U.S alongside such names as Kenny Larkin, John Tejada, Tim Xavier, Daniel Bell, Ben Sims, Adam Beyer, Jeff Mills, Speedy J, Ritchie Hawtin, Mathew Dear, etc. and has also released quite a few heavy tracks on labels Omniscient, Remains, Heavy Industries, and his own DROID Recordings imprint.
Drumcell has been known to keep on the edge of technology and be continuously pushing the limits to what the future has to offer. He is always in the process of developing homebrew software as well as cutting edge hardware solution to bring a fresh innovative taste to his production and performances. When performing, Drumcell can be seen blurring the lines between a live and a DJ set by utilizing tools such as FX processors, samplers, drum machines and other devices to weave a thick blend of acidic techno and aggressive but funky minimalist groove to ensure a frenzy amongst his listeners.
With the state of electronic music in North America leaning towards stripped down funk rather then progressive fluff these days, Droid has become the center for LA techno and Drumcell remains steadfast in his mission of putting this city on the global map.


JAMESPATRICK
JamesPatrick promotes and plays detail oriented dance music for the feet and the mind. Directing a movement of minimal/dub techno in the Midwest, JP pushes the definitions of "forward thinking media" into new realms. "Improvising with music and technology" has become the manifesto of his lifelong journey.
JamesPatrick has enjoyed 10+ years of playing music around the world, and throwing parties with, and playing alongside likewise innovators in the genre; Bruno Pronsato, Someone Else, Miskate, Ezekiel Honig, Sutekh, Sammy Dee, Jay Haze, Magda, Richie Hawtin, Algorithm, Ben Nevile, Randy Jones, Jake Fairley, Dapayk, Baby Ford, Mike Shannon, Deadbeat/Crackhaus, Barem, Butane, Richard Devine, and many more.
JP has for the last few years also been one half of the Klikmusik project with fellow Minneapolis techno afficionado Mike G. Their two man extended cooperative dj+laptop+fx sets have captivated listeners throughout the Midwest while pushing the boundaries of a traditional DJ set to exciting new levels.
Currently, JP teaches software music production at Minneapolis' Institute of Production and Recording, and he directs the websites www.microphono.com, www.vitalvinyl.com, and www.secrettechno.com.
Website:
http://www.klikmusik.com/artists/index.html