minimal techno + avant house
every first Saturday at the Endup

featuring from Montreal:
STEPHEN BEAUPRE - Live PA
(Musique Risquee . Mutek_Rec . ~scape . Force Inc.)
As DJ, producer, MUTEK veteran, and half of the Crackhaus project (alongside Deadbeat), Stephen Beaupré has been an integral member of Montreal's vibrant electronic music scene for over a decade. His sound splices together the best of funky cut-up house and bumping minimal techno with a playful, sharp wit that has delighted both chin-strokers and dancefloors worldwide.


and from New York City:
AMBIVALENT - Live PA
(M-nus . Clink . Klikhaus . Leftroom)
Kevin McHugh (aka Ambivalent) is a rapidly rising star in the world of neu-techno and the latest addition to the Minus family of artists. His dark, sleazy, and intense musical stylings, epitomized by his current hit "R U OK", make this SF debut a must-see for fans of Troy Pierce, Heartthrob, and the heavier Minus sound. 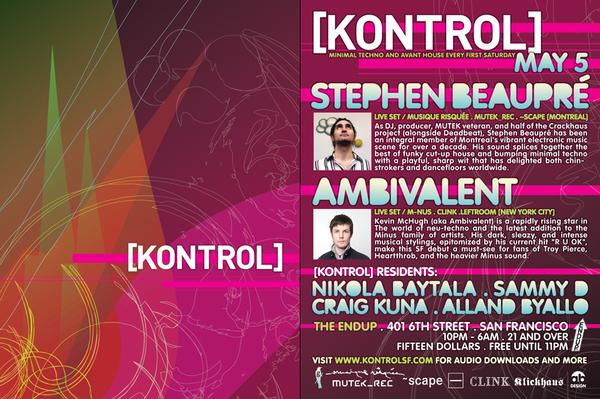 Based out of Montreal, Stephen Beaupré has been involved in the electronic music scene for more than a decade. Cutting his teeth as an adolescent promoter for electronic music events in Ottawa, Stephen became quickly seduced by the more substantial rhythms and textures of house and techno that was striving to be deeper, funkier and more engaging. He began DJing at 18, always with a mind for the dancefloor, always trying to stay close to the crowd. With a love for gritty, punchy music at once technological and organic, Stephen skillfully mixes dancefloor rocking tracks, always trying to create an atmosphere of humor, excitement and malaise.

As a Producer, Stephen Beaupré creates much more diverse musical compositions of disected house/tech. With more emphasis on narrative and multiple changes in direction, the blend of nervous rhythms and dominant basslines drive forward melodies created from quirky sources linked together by idyosyncratic threads that sometimes touch very deep. His first solo 12 inch "Dirty Lipreading" came out in 2004 on Musique Risquée, followed in 2006 by the "Macro-house EP" on ~scape and his first solo full length album, "Foe Destroyer" released on both Musique Risquée (LP) and Mutek_Rec (CD). He has (alone and with Crackhaus production partner Deadbeat) produced remixes for Perlon, Force Inc., and Kalimari, and his works have been featured in several compliations and mixes, including Akufen's "Fabric 17".
Over the past several years, Stephen has toured in four continents, both solo and with Scott Monteith as "Crackhaus", dropping down in such cities as Tokyo, Berlin, Beijing, Detroit, Valparaiso, Mexico City, Paris and New York to name a few, and playing alongside such luminaries as Matthew Herbert, Richie Hawtin, Ricardo Villalobos, Pole, Isolée and many other like-minded artists.

AMBIVALENT
Kevin McHugh (aka Ambivalent) is a native of Washington, DC and resident of New York City. His musical development began in DC where he was influenced by the broad nature of that city's music scene. Early exposure to acid-house and industrial side-by-side with DC's homegrown go-go and hardcore punk scenes deeply influenced his music.
After a brief period in London, Kevin moved to New York in 1996. He began producing a music series inside the Brooklyn Bridge Anchorage for Creative Time. Over the next 5 years he produced events with artists such as Thomas Brinkmann, Dimbiman, Carl Craig, Ryoji Ikeda, Pole, and many more. It was during this time that he began making a connection with M-nus. He went on to produce events in New York featuring friends such as Magda, Troy Pierce and his roommate Jesse Siminski (Heartthrob) as well as Matthew Dear, Akufen and Sammy Dee.

He moved to Berlin in 2004 to help Richie Hawtin produce the Plastikman live concert. He later returned to New York and re-dedicated himself to producing music inspired by his friends. He answered an ad for an apartment, and moved in with a DJ named Camea. She later created Clink Recordings. He DJs regularly in New York, and on his internet radio show, The Nerd Tank, with Camea. He has releases and remixes (past and forthcoming) on M-nus, Clink, Klickhaus, Esperanza, and Leftroom. Kevin has just released his debut 12" on M-nus entitled "R U OK", the title track of which has already been selected for inclusion on the upcoming Best of Minus compilation "Nothing Much", to be released June 1st.

Music samples + a review of R U OK:
http://www.soulseduction.com/common/item_detail.php?ItemID=171456

Guthrie has been the main music buyer at Tweekin' Records for years, playing a heavy behind-the-scenes role as musical tastemaker in the Bay. Prior to that he was the man behind Integral Concepts, an SF monthly techno staple in the millenial era that featured everyone from Hyperactive to Frankie Bones. His extensive collection of classics, coupled with his access to the freshest new tracks, make this appearance sure to be an early morning treat.

Last month was totally off the hook once again. The End-Up rules when the weather is nice! Next thing I knew it was 4pm on Sunday!