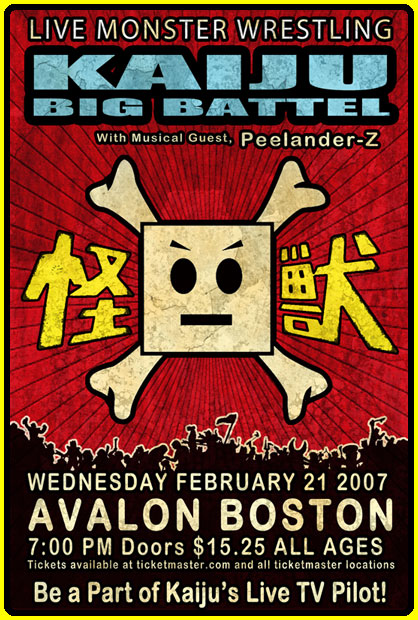 On February 21st Kaiju Big Battel: The TV Pilot will rock the Avalon Boston for a full-fledged Big Battel filmed for a TV pilot on G4 TV!

We are very excited about the prospects of a Kaiju TV series, and it's only fitting that we film the pilot in Kaiju's hometown. Boston has been very generous in their support of Kaiju over the years and we wouldn't want to hold this Big Battel anywhere else. You can be a part of this monumental moment in television history by becoming a member of the live studio audience. Tickets are available now at Ticketmaster outlets and ticketmaster.com.

Please visit kaiju.com for all sorts of news about the upcoming Big Battel, including the newest episode of the Kaiju Podfighto, featuring Louden Noxious' brilliant explanation of time travel. It's like listening to Stephen Hawkins, but with more shouting!