It's going be the spookiest, scariest Bootie ever! It's Halloween Booootie! Resident DJs Adrian & the Mysterious D will be throwing in some spooky Halloween bootlegs into the mix, making sure the night is a monster mashup spooktacular! At 11 PM, house band Smash-Up Derby takes the stage in full costume, playing a special Halloween-themed set, including their Nirvana classic, "Smells Like Monster Mash!" In the upstairs room, it's the return of Seattle's original mashup bootleg party, FrankenBoot, with DJ Freddy, King of Pants and DJ Boyshapedbox.

We've got a pair of spooky Midnight Mashup Shows, with Princess Kennedy becoming the "Hollaback Thriller Girl" with the Funk4Soul Dancers, and John! John! will be "Walking With A Ghost." After the shows, enter our Costume Contest, with $100 cash prizes (and a trick-or-treat goody bag) for the winners in three categories: Best Overall Costume, Scariest Costume, and Best Mashup Costume. And last but not least, we've got free exclusive limited-edition Halloween Booootie mashup CDs for the first 300 people in costume! 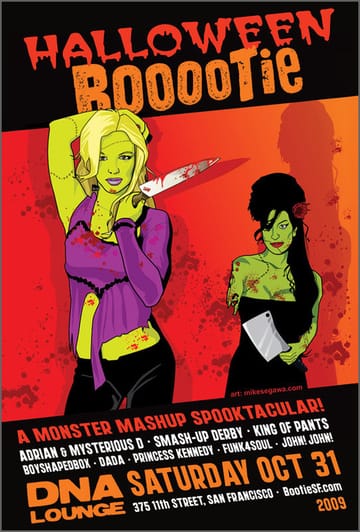 If you like events like this, please contribute to the DNA Lounge Legal Defense Fund so that we can keep bringing them to you! The ABC is trying to shut us down, and we need your help to fight back!

Tonight! This party will be epic!