Robert Bellm is a Seattle-based artist who paints vibrant images from nature such as flowers and birds along with the occasional electrical tower. He calls the mix of natural shapes with manmade forms “organic technology.” The Art Center graduate’s bold and matter-of-factly executed combination is startling yet natural to most eyes--thought provoking yet pleasing.

Munkao is painting a series of kaiju-inspired figures in destructive settings with the context of love, relationships, and sex. His tone is almost always humorous but the solid craftsmanship belies serious skill, effort, and direction. The acrylic-on-canvas pieces will be mostly acrylic on canvas, each no larger than 8” by 11”. 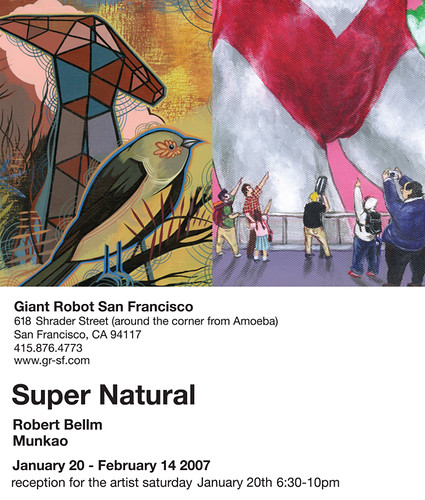