Giant Robot SF - "In The Shadow of This Fading Light, We Waited" - works by Marci Washington & Michele Carlson May 12, 2007 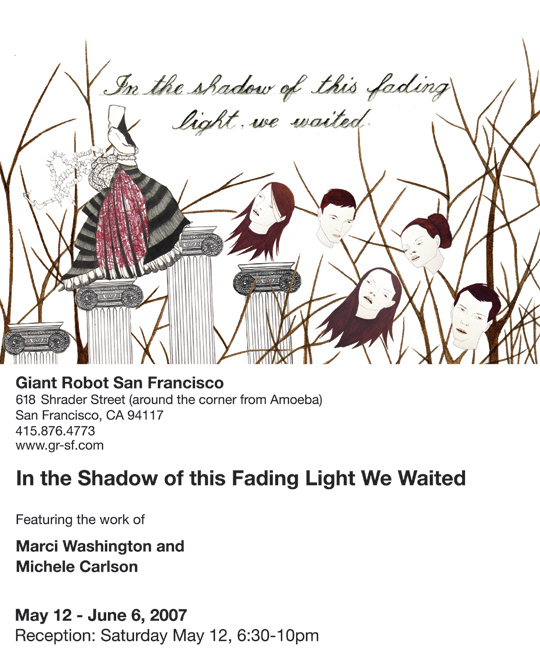 Giant Robot is proud to present "In The Shadow of This Fading Light, We Waited," an art show featuring new works by Marci Washington and Michele Carlson.

Marci Washington is a Bay Area painter who applies bold, folk-like strokes to create scenes that could come from a Dickens or Bronte novel. Her latest works depict individuals and places that can be interpreted as romantic or political, beautiful or tragic. When placed together, they hint at a larger narrative as well as create a social context. Washington is preparing medium-sized watercolors and gouaches on paper, as well as lithographs, for the show.

Michele Carlson's roots are in Seoul and Seattle, but she resides in the Bay Area as well. She draws elegant, mostly black-and-white pieces featuring subjects like girls in big patterned skirts, and spikes them with images of tanks, shotguns, or pit bulls. The execution is pleasing, and the unlikely combinations come off as natural, not jarring. For the show, Carlson is preparing a set of several original illustrations.