Giant Robot is proud to present the art of Rachell Sumpter at GRSF.

In her paintings, Sumpter depicts nomadic people in the barest of conditions. Her world is largely empty but not bleak; the subjects seem to get along just fine with limited vegetation, occasional animals, and companionship of friends and dogs. Her stylized-but-realistic work is a commentary on the power of the human spirit as well as the excess in modern society. Clothing and other details suggest Sumpter is alluding to Eskimo, Native American, or Sami culture, but her subject matter is completely made up.

For “Frizzly Gur,” the San Francisco artist is creating at least eight original paintings as well as new silkscreen prints.

Giant Robot started from a black and white photocopied zine in 1994, evolving into a reputable, internationally distributed bi-monthly magazine and book publisher. Giant Robot Store opened its doors on Sawtelle Blvd. in West LA in 2001. In 2003, Giant Robot opened GR2, a hybrid store/gallery featuring emerging artists such as David Choe, kozyndan, and Barry McGee. Later that year GRSF opened in San Francisco's Upper Haight district, followed by a Giant Robot restaurant, gr/eats, to further the lifestyle experience. In 2005, a fourth store was opened in Los Angeles' popular Silver Lake neighborhood, with a fifth installment in New York City's East Village. The most recent addition is the Giant Robot Gallery which opened this past March next door to the Giant Robot New York Store. 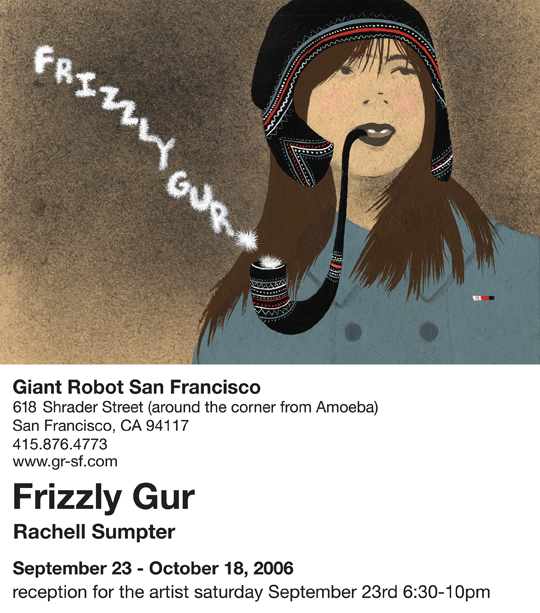