Who: GavinWatch & the League of Pissed Off Voters
When: Thursday, March 29, 7-11pm
Where: El Rio 3158 Mission at Cesar Chavez

Gavin Newsom's recent scandals have gotten a lotta media play and raised public concern about his judgment and lack of focus on his job. Meanwhile, his troubling lack of commitment to solving the city's most serious problems is being completely ignored by the media and getting no play at all. 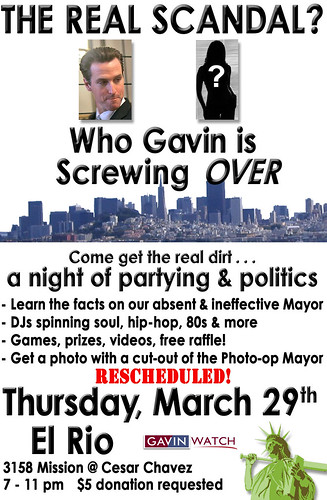 We are happy to announce that the GavinWatch re-launch party has been re-scheduled for next Thursday, March 29th at El Rio. We are deeply sorry for those of you who showed up at Balazo last night. We appreciate your support, and we hope that you'll give us one more chance. Baring further intervention from City inspectors, we promise that you'll get your chance to get your picture taken with the photo-op Mayor while learning all about his absent and ineffective ways.

GavinWatch and the League of Pissed Off Voters at our "The Real Scandal: Who Gavin is Screwing OVER" party and learn some of the dirtier and, in our opinion, more interesting secrets about our "playa maya." All in the fun, funny, & booty-shaking atmosphere you expect from the League.

* Do Somethin About It: Take action in support of green energy & real violence prevention
* "Photo-Op Mayor:" Get your picture taken w/ the Mayor (cardboard cut out)
* Launch of the new GavinWatch website and our new street campaign
* World Premieres of several new GavinWatch videos
* DJs in the front & back rooms
* Other fun & surprises!