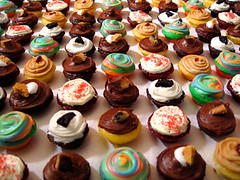 FREE for you on Friday!

Mark Becker was born in Montreal and raised in New York and California. His first success as a writer came as a freshman at the University of Denver when he won an essay contest and had his work published in the school's freshman English textbook. He now writes and acts for the sketch comedy troupe Camp Wayne, which performs every month at the Broadway Comedy Club in Manhattan. Mark enjoys playing tennis, riding his bicycle, and people watching in this wonderful city.

Deb Victoroff is a playwright with several well-received short plays under her belt. Her plays have been performed in Manhattan (at The Producer's Club, the Samuel French competition, and the Strawberry One Act Festival), in Brooklyn (at the Black Box Festival), at the Source Festival in Washington DC, and the First Stage in Los Angeles. Her play "Letter From a Soldier" was well received in Vancouver (a
review is here) where it was performed at the Walking Fish Festival and later at the Fringe Festival. The play also came in second (out of more than 200 submissions) in the New Works of Merit Competition out of Manhattan.

Diana Vilibert (www.diana-vilibert.com) is the web editor at Marie Claire, where she gets on her soapbox regularly to write about sex and dating for marieclaire.com. Her work has also appeared in CosmoGIRL!, nerve.com, thefrisky.com, and various other dot-coms. You can follow her quarter-life crisis at diana-vilibert.tumblr.com.

Added by rachelkramerbussel on September 29, 2009