Exploit Boston Game Night at the Common Ground is coming up on Tuesday, February 7th. 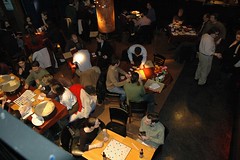 We have a lot of board and card games available to play. The "house game" is Apples to Apples -- there's always at least one group playing and you can easily jump into it even if you've never played it before. At the January game night at the Paradise Lounge there were about 60 people there. It's the sort of event where you can bring a group of friends or come alone and meet new people. It's a social event not a competitive tournament.

If you want to provide 30 minutes of the night's soundtrack, bring your MP3 player with a special playlist and we will play it.

For extra prize drawing entries, grab links and banners from the event website. Each person who you send to the game site equals an extra chance to win something. Prizes include games, Common Ground gift certificate and stuff from Sam Adams.

MBTA Directions: Take the Green Line's "B" train to the corner of Harvard/Comm Ave. Walk down Harvard Ave so that McDonald's is on your right and Marty's Liquors is on your left. The Common Ground is a few blocks ahead on the left at 85 Harvard Ave, after the set of lights. The #66 bus from Harvard Square stops around the corner at Harvard/Brighton Ave in front of Harper's Ferry.

What People Are Saying: Sarah Tomlinson at The Boston Globe said: "It's the perfect chance to make new friends and maybe even emerge as the board games champ you?ve always dreamt you could be." Robert Vassegh, publisher of Cheap Thrills Boston said: "If someone was playing a game, it was definitely a good atmosphere to jump into a new crowd. I met some cool people too!"