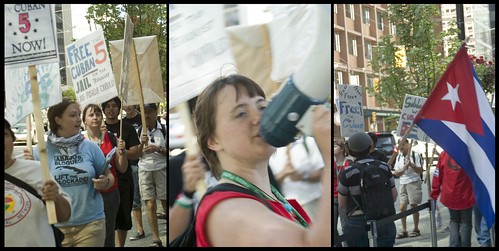 (photo by Keith Loh, licensed under the Creative Commons)

Free The Cuban Five Imprisoned in the U.S.!

At this stage in the development of a continent-wide program to force the US administration to grant the Five new trials or simply to allow them to return home to Cuba, the Calgary CCFA (Canada-Cuba Friendship Association) is holding a peaceful information picket.

Please bring placards and banners to support this cause!

We will be asking participants and passersby to sign letters to the Prime Minister, asking Mr. Harper to intercede with the Bush administration on behalf of the Cuban Five.

Summary of the Cuban Five's Plight:

In the mid-1990's five Cuban patriots emigrated to Miami, Florida, to infiltrate some of the many counter-revolutionary, anti-Cuban terrorist groups located there. Gerardo Hernandez, Ramon Labanino, Antonio Guerrero, Fernando Gonzalez and Rene Gonzalez were all acting out of the utmost compassion and concern for their compatriots in Cuba: their hope was to be able to provide advanced warning to Cuban authorities of terrorist attacks by their enemies living in Florida.

In the past, these terrorists had been responsible for hundreds of attacks on Cuba, including the bombing of a Cubana airliner on October 6, 1976 (which killed all 73 passengers), the blowing up of tourist facilities, attempted assassinations, the spreading of pathogens and biological agents among the populace, and the spraying of poisonous chemicals on crops and livestock.

It was the prevention of further debilitating terrorist attacks that brought the Cuban Five to Miami.

The information the Five discovered about plans for new attacks by these terrorist groups was passed to Cuban authorities so Cubans could prepare to repel these assaults; it was also provided to the FBI by the Cuban government in the hopes that this terrorism against civilians would be halted by the US government.

Instead, the Five were, on September 12, 1998, themselves arrested!

In trials that international observers deemed biased, legally irregular, excessively punitive, and even predetermined, the Five were found guilty of conspiracy, espionage, and attempted murder. None of the charges had any validity whatsoever. Nevertheless, the Five were sentenced to a total of 77 years plus four life sentences and placed in five different prisons across the U.S., often with extended periods of unjustified solitary confinement. The Five have now been imprisoned on trumped up charges for eight long years!

All attempts to free these Cuban heroes or even to get them new trials on appeal have been foiled by the political manipulations of the Bush government. Visits by family members, wives, and children have - in contravention of UN human rights policies - been made almost impossible by the US administration. Both the United Nations and Amnesty International have declared the Five to be prisoners of conscience and have, along with many other organizations, requested that they be shown clemency.


The DVD Documentary Mission Against Terror is also an excellent source of information.