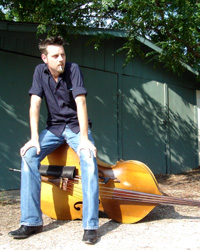 Fiddling on the Fat
Strings

Who: Chris
Black (from Austin, Texas), and the Low
End String Quartet

The bass violin goes by many names: Contrabass, Double Bass, Stand-up
Bass, etc. Call it whatever you like, the important thing is that it
sounds so damn good. Spend an evening with a few basses, and some of
their smaller-stringed cousins.

Chris
Black has played nearly every instrument you don't blow into
with
nearly every conflagration of degenerate sound junkies within shouting
distance, starting out as upright bassist for Shoulders back in the
early 90's. From there, he hopped continents and sat in with Parisian
rockers Les Wampas for a couple of records and tours before returning
to Texas to pursue his love of gambling. In 2000 he met Graham Reynolds
of the Golden Arm Trio, and toured around the country as upright
bassist and guitarist for that hair-raising improvisational
eutastrophe.

He's now in the midst of a national tour promoting the record. For his
live solo show, Chris plays with an upright bass, overdriven acoustic
guitar, banjo, and an assortment of other instruments. He loops the
music live and on the fly, creating sounds and rhythms to sing against.
It is boomy, dark, abused and simple. His songs are soaked in booze,
sadness, and redemption.

Opening the show, will be the debut performance of the Low
End String
Quartet, an ensemble formed by composer / guitarist Jonathan
Matis. The
instrumentation differs from the standard string quartet model, adding
a bass, dropping a violin, and swapping a guitar where the viola should
be. This “new and improved” string quartet lineup
is much better suited to clubs and bars than the classical model, and
better equipped for rumbling your ribcage.

The group is staffed by a diverse bunch: jazz bassist Dan Barbiero;
classical (although quite eclectic) cellist Jodi Beder; Matis on
guitar, bringing his mixed bag of avant-rock, jazz, and post-classical
influences; and another classical veteran, Andrea Vercoe on violin.
They intend to rock.