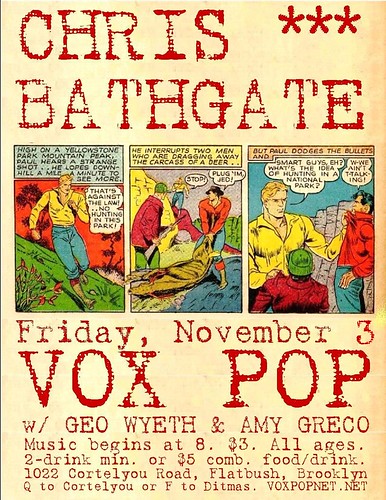 Ann Arbor-based songwriter Chris Bathgate, a central figure in the exploding Michigan indie-folk scene, is touring the East Coast for the first time. Known for his equally haunting vocals and songwriting, Bathgate sounds like a landscape-cocktail of North Atlantic cliffs in a November gale and Northern Illinois prairies on a summer afternoon. His devastating and unpredictable live performances, which on any given night can feature merely a stark acoustic guitar, tradtional string-band instrumentation, a sweeping ensemble-pop backing band, or a cacaphony drawing on luminaries of the fabled Michigan noise scene, are quickly becoming the stuff of legend. Bathgate has shared stages with (solo or with former much-buzzed band The Descent of the Holy Ghost Church) acts as diverse as Magnolia Electric Co., NOMO, Kelly Joe Phelps, Akron/Family, The High Strung, Great Lakes Swimmers, Blanche, Fred Thomas (Saturday Looks Good to Me), Canada, Jim Roll, and Great Lakes Myth Society.

Little-known outside of the Midwest, Chris Bathgate is poised to take the rest of the country by storm. Be the first kid in NYC to find out what all the buzz is about. You won't be disappointed.

"His style is accessible yet idiosyncratic, a fact that endears him to the older, more established folk set as much as it does to the twentysomethings-with-beards basement-show crowd." –ANN ARBOR PAPER

"Surely there are hundreds of guys working under the radar making great music, but I can't remember ever hearing one as accomplished as Chris Bathgate . He sings sad songs, rock songs, folk songs in a cohesive manner that somehow summarizes everything I look for in music, and all with this great thick-tongued New England accent." –YER BLOG

"…oozes death like so many of the great folk songs from the English tradition." –SONGS:ILLINOIS

"…aims to capture so many of this world's beautiful, seldom-articulated ephemera (and succeeds)." –CELESTIAL BISCUIT

"… the soul of a folk musician and at times the hardness of a loud electric guitar." –GALENA GAZETTE

"Chris Bathgate is very attractive, by the way." –SOME GIRL'S LIVEJOURNAL