BOOTIE moves back to second SATURDAYS this coming weekend!

Guest DJ BC from Boston, along with DJs Lenlow and Adam Balm of Mash Ave. this Saturday, October 14th at the DNA Lounge

Bootie is back ... back on second Saturdays, that is! And to help us kick off Saturday night in style, we are proud to present Boston's very own DJ BC. You might know BC from his two highly-acclaimed Beastie Boys vs. Beatles albums, The Beastles. These ingenious mashup albums were ultimately banned by the Beatles' record label – but not before getting a ton of press and being blogged about all over the world! 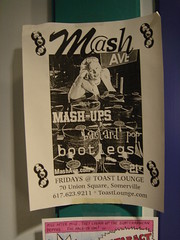 DJ BC is also one of the creators of MASH AVE, Boston's premiere mashup bootleg night. Along with fellow Boston bootleggers LENLOW and ADAM BALM, these "wicked" DJs will be bringing their own brand of East Coast mashup style to the upstairs room at Bootie. Lenlow has had several of his mashups featured on various Bootie CDs ... and his latest creation, "Work It Out," is in this month's Bootie Top 10.

Bootie house band SMASH-UP DERBY will be hitting the stage at 11 pm, armed with some new rockin' songs under their belts. They'll be debuting two new mashups and both are heavy – after all, it's Rocktober! So be ready to bang your head to some Ministry vs. Kelis, and some Led Zeppelin vs. the Beastie Boys. RAWK!

Yup, we've got not one, but two shows for you at midnight! The first will be PRINCESS KENNEDY's swan song performance in San Francisco, before she leaves for grad school in Salt Lake City. Princess Kennedy performed Bootie's first-ever midnight mashup show, so we're going to miss her! She'll be joined on stage by Bootie go-go boy STEVEN SATYRICON.

Then it's time to get spooky ... we've got an epic pre-Halloween show in store for you, featuring the Bootie debut of DIZZY! Expect zombies, werewolves, witches, and more!

And of course, as usual, resident DJs Rebel Djs ADRIAN & the MYSTERIOUS D, PARTY BEN, and DADA will be spinning throughout the night.