You might know them from their first album, Yoshimi Battles The Hip-Hop Robots, which blended the Flaming Lips album with rap vocals. Later that year, they released their landmark A Night At The Hip-Hopera, which mixed hip-hop with the music of Queen, and peppered the combination with a mix of film and spoken-word samples, critiquing the current state of the music industry. The album won the band legions of fans, a flurry of press, and a legal threat from Disney, who, through Hollywood Records, own Queen's catalog in the U.S. This year, The Kleptones released the epic double album 24 Hours, their most ambitious release yet, and one that has been universally hailed as "the first true mashup concept album."

(Click on the above Kleptones albums to check out a listing of the tracks and samples!)

Alongside their album releases The Kleptones have also built up a reputation as laptop DJs deluxe, twisting and warping their album content alongside a range of music stretching from house, hip-hop, electro, all kinds of rock and beyond, remixing, looping and reconstructing as they go. For fans of mashup/remix culture, this is one DJ set you won't want to miss! 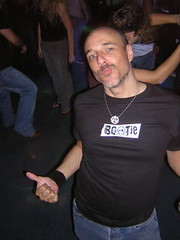 Your resident Bootie DJs ADRIAN, MYSTERIOUS D (http://www.rebeldjs.com), and Indie 103.1's main mashup man PAUL V.(http://www.thesmashmix.com) will also be in the house, spinning all your favorites (and soon-to-be favorites). To get a taste of some of the bootleg mixes you'll hear at Bootie LA, be sure to tune in to Paul V.'s Smash Mix this Friday at 5:30 pm on Indie 103.1.

And it's been six months since ALANNA SUPERSTAR has graced us with a midnight mashup show -- but on Saturday, this local singing sensation returns to rock the Bootie stage with another live mashup performance! Let's just say that Alanna will "get the party started!"

As we do every month, we've got free Bootie CDs to the first 50 people through the door -- and to entice you even further, it's 2 for 1 before 10 pm! We hope to see you this Saturday!