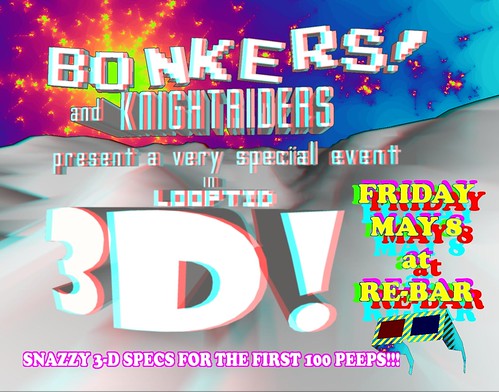 Bonkers and Knightriders have decided to join forces to bring you an
evening of sexy techno and mental IDM in 3D!
We have gone ahead and booked Prototype 909's own Dietrich Schoenemann from NYC!
This legendary producer and vinyl master will be headlining the event.
Becuse Dietrich is the go to guy in the State's for
vinyl mastering he get first pick of the best. And for this event he
will play 90% dub plate acetates that he cuts himself!!

In addition, LIVE and in concert - NERD REVOLT - this long awaited
debut performance by Seattle's own
m.0 and Catherine Jade promises to prove once again what massive
talent our great city has to offer.
Also, May 8th at the Rebar, don't miss Bonkers own ERICTRONIC live!
(CD Release)
and representing Knightriders - Travis Baron - bangin' out a 100%
Vinyl techno Dj set!

The first 100 through the door will receive 3D glasses! Loopted
Visuals has gone overboard.
Bringing you a night of Visuals in 3D!
And don't forget about the Bonkers Burritos! :) 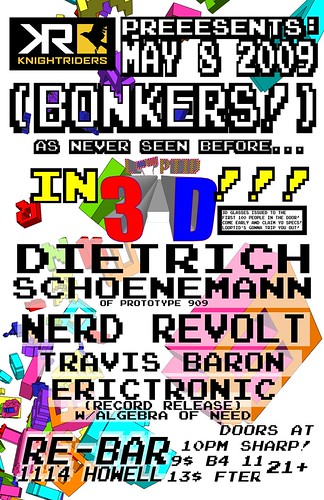 Dietrich is behind the labels Tora Tora Tora, Hidden Agenda, Stamp
Series and ADDON.
His recent productions have been dancefloor based, outside of the
remix for Philip Glass.
Current collaborations include Side Four with Tony Rohr as well as The
Rancho Relaxo Allstars.
He continues to tour as a solo DJ or live act and can also be seen
performing with one of the groups.
Besides the releases on his own imprints, his productions can be found
on labels like Tension, Sondos,
Kiddaz, Taksi, Sonic Groove etc. Brief history: Dietrich began
performing live in NYC clubs when he was
a teenager in the early 90s. Some of the first major gigs included
Danceteria and [email protected]
He formed Prototype 909 with Taylor Deupree and Jason Szsotek in the
summer of 1993. Four albums and four
years of constant touring ending P909 in 1997. Hidden Agenda was
started along with Dietrich's becoming a
dancefloor DJ at this time.

After years of being angst-ridden hermits, m.0 and Catherine Jade
(now known as the iLL.F.O.) met and started creating mad nuclear
experiments in the studio. Both classically trained musicians,
they each bring a unique style and sound to the mix.
Along with sharing an unhealthy obsession with synths,
they believe in bringing a raw and honest vibe to electronic music
(peep the realness at: www.dejaded.com). Their joint arsenal is a deadly one,
consisting of 2 laptops with Ableton Live, hardware and software
synths, plugins,
MIDI controllers, and tons of sound-mangling weapons that threaten to
crush your brain.
Combining the precision of their studio work with the spontaneity of a
band, Nerd Revolt’s
debut performance will feature live synths and vocals, beats dropped
and manipulated
on the fly, and a whole lotta punk rock attitude. It’s 2009
motherfuckers, and the future is now.

Dance Floor ignitor, Travis Baron, has been banging out techno's best
for well over a decade now.
Inspired by local Seattle Techno jocks back in the late 90's, Travis
started throwing one offs and
club nights around town winning huge accolades. Those early days
helped to define his own sound.
Buying vinyl every payday and building an arsenal for over 10 years
has paid off big time. Having
played alongside techno superfreaks like Kevin Saunderson, Neil
Landstrom, Cari Lekebusch, Adam X,
Frankie Bones and Woody Mcbride, Travis Baron comes to the decks
prepared to slay faces. In 2007
Baron teamed up with Seattle local destroyer M'Chateau to produce the
Knightriders Micro Rave Series.
Since then Knightriders Inc. has be responsible for producing renowned
techno club nights and
the best in underground Seattle Techno entertainment. In an effort to
preserve the vinyl format, Travis
also produces the NW's premier yearly Vinyl only DJ talent competition
"Battle of the Megamix". Other
projects include the new KR techno label and "Static Guide", a local
zine dedicated to Seattle Culture,
Music and Arts. Travis, still to this day, plays 100% vinyl techno
sets designed to drop jaws and shake ass.
With over a thousand records constantly rotating in and out of his
Seattle storage unit you can be sure to
experience specially designed and uniquely different sets for every
event you find him performing at.

Erictronic - LIVE
ERICTRONIC (CD Release) live!
Erictronic, one of the men behind Bonkers, has a huge imagination that
allows him to pull
off bizarre musical feats other have only dreamed of. Its only fitting
that the man is slated
to release 8 (EIGHT) albums this year, of which the first will be
available at the show! 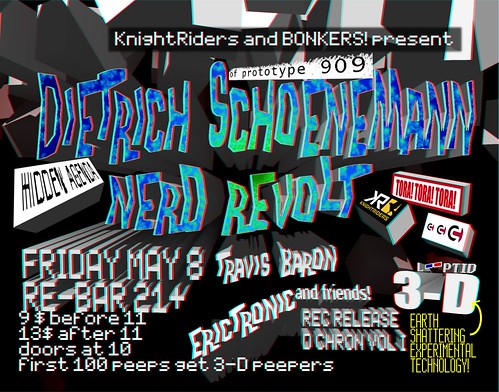