CC Salon SF is now being presented in conjunction with CopyNight SF!

* The Public Library of Science (PLoS) is a not-for-profit organization comprised of scientists and physicians committed to making medical and scientific literature a public resource. Hemai Parthasarathy (Managing Editor of PLoS Biology) and Barbara Cohen (Executive Editor of PLoS Journals) will discuss PLoS's mission, its publications, and some ideas about the future of scientific publishing.

* Digg is a popular user-powered news site with more than 400,000 registered users. Owen Byrne (Co-founder and Senior Software Engineer) will talk about the site's history, its unique features, and its use of CC licensing.

* Magnatune is the online record label that distributes its catalog under a Creative Commons license, splits album sales directly with artists, and takes a vocal stance against DRM. Magnatune founder John Buckman will discuss how the company makes money by using CC licensing, as well as how the CC and open source movements are helping to change the music industry for the better.

Also: Magnatune's Shannon Coulter will be DJing a set of music from the label's catalogue -- come hear what all the excitement is about! 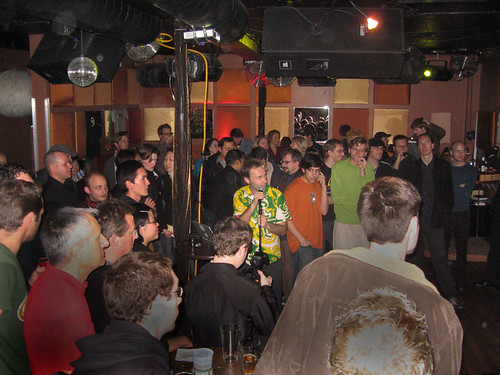 This Flickr photo of CC Salon was taken by DNSF and is used under a CC BY-NC-ND 2.0 license.

Details:
Please join us on Wednesday, August 9, from 6-9pm (don't worry if you're late; there will be stuff happening all night) at Shine, (1337 Mission Street between 9th and 10th Streets). Shine has free wi-fi. Note: Since Shine is a bar, CC Salon is only open to people who are 21 and older.

About CC Salon:
CC Salon is a free, casual monthly get-together focused on conversation, networking, and presentations from people or groups who are developing projects that relate to open content and software. Please invite your friends, colleagues, and anyone you know who might be interested in drinks and discussion.

About CopyNight:
Since March 2005, CopyNight has helped organize a monthly social gathering about restoring balance in copyright law in San Francisco and now 16 cities across the US. The San Francisco CopyNight will now be hosted right alongside CC Salon on the second Wednesday of every month. Welcome, CopyNighters! 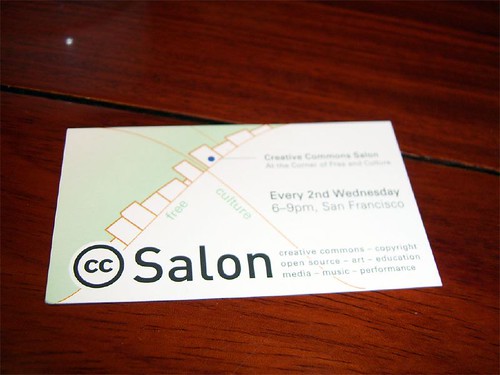 Click through to DIGG to raise awareness about this event: http://digg.com/tech_news/Digg_Co_Founder_Owen_Byrne_to_speak_at_CC_Salon/who

Yep, come on out kimo and bring 20 friends!