Join us for this historic event, where Rep. Pete Stark (D-CA) will give his first-ever public remarks on becoming the first openly Humanist and nontheistic member of US Congress. Stark, a senior member of the influential Ways & Means Committee, and a veteran of the US Air Force, will deliver the 15th annual Alexander Lincoln Memorial 'Harvard Humanist of the Year' lecture, presented by Harvard's Humanist Chaplaincy for atheists, agnostics and the non-religious. The Harvard Secular Society student group is co-sponsor.

Admission is free, but it is highly recommended to arrive early, as space is limited. 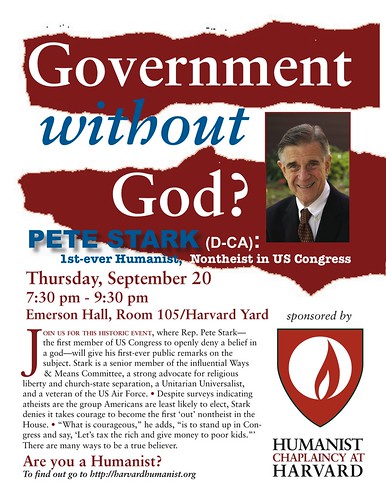 Despite the numerous surveys showing atheists to be the group Americans would be least likely to elect to political office, Stark denies that it takes courage to become the first admitted non-theist in the House. "What is courageous," he adds, "is to stand up in Congress and say, 'Let's tax the rich and give money to poor kids."' There are many ways to be a true believer.

Congressman Stark has served in Congress since 1973. A senior member of the powerful Ways and Means Committee, he is currently the Chairman of its Health Subcommittee. Stark previously served as the subcommittee's Ranking Minority Member from 1995 to 2006 and as its Chairman from 1985 to 1994. Before being elected to Congress in 1972, Stark was a successful businessman and banker. Stark is a graduate of the Massachusetts Institute of Technology (MIT) with a degree in engineering and the University of California, Berkeley with a Master's degree in Business Administration (MBA). Before his business career, he served in the U.S. Air Force.

Stark champions universal health care, and speaks out for peace, freedom of choice, and protecting our environment. He is a tireless advocate for children, families, senior citizens, and people with disabilities, as well as the residents of California's 13th Congressional District. Stark has four daughters, three sons, and eight grandchildren. He is married to Deborah Roderick Stark of San Lorenzo.
Check www.harvardhumanist.org for more details.

Rep. Stark is and has been a Unitarian for many years. However, in the past year he has indeed become comfortable referring to himself as a non-theist, and has accepted this award as our Harvard Humanist of the Year. He will also be honored in 2008 as the American Humanist of the Year, by the American Humanist Association. Thus we can confidently say Stark is the first-ever openly Humanist member of US Congress.

What time will the event start?

I have some questions for those who do not believe that God exists......and so you depend on science to give you the answers to life and meaning... scientists have proven that the universe started with a singularity.....what was the cause of that singularity? how could something that had a beginning...not have been created? true science should be honest about the implications....-Mark

It makes little sense to think this, since God is a very complex, abstract entity, unlike the singularity. Matter and anti-matter pairs jump into and out of existence spontaneously, and the singularity was a quantum anomaly.

Simple things produce complex things, not the other way around. All of nature appears to be perfectly tuned and configured, but this is an illusion, and a testament to the huge effects of slow, gradual change. Elements formed molecules, formed replicators, formed cells, formed bacteria, formed plants, formed animals, formed humans. Natural selection leads to diversity.

However you want to explain matter or anti-matter....it still had a beginning...when was the last time you saw matter and anti-matter pairs jumping into and out of existence? It cannot form, out of nothing, on its own...

Also, evidence, observations and the fossil records show that complex organisms appear well developed...not simple to complex...but suddenly - "complex" life forms arrive on the scene......there are too many (hundreds of millions) forms of complex species of life on earth to conclude natural selection.... furthermore... with the variety of life forms and range of environments and conditions they live in....don't you think it would take more than 4 billion years to "evolve" on earth - it's not really that long of a time period....I think it is highly unprobable that 13 billlion years would be enough....there is something more out there, andyou owe it to yourself to consider more deeply than perhaps you have to this point in your life.

To Mradams:
your response to Rhodes3's question of what caused god was rather silly. u said: "There is no "cause" of God...but there is a beginning to the universe, so that must have a cause...but there is no beginning to God..."
ummm....why not??
anything that exists must have begun existing at some time. your "logic" would tend to show that god must not exist really, since , in your view, it had no beginning. having no beginning to a thing's existence is a logical impossibility. otherwise "existence" has no meaning as a concept.
Just asserting something does not make it so, especially if the assertion is illogical, such as your claim that god had no cause or beginning. it makes no sense to say god just exists but had no beginning or no cause. and why is it the universe singularity "must" have a cause, as u said , but god must not? anything that exists must have a begining to its existence, or "existence" is a meaningless term. further, if we speculate that a god entity Did have a cause, then we must wonder what caused god's cause to begin existing? so an infinite regression occurs in speculation about supposed god entities causing eachother. instead of that silliness, let's try sticking to what we know is real and does exist, ie, the universe , and not pretend to know about imaginary god-entities for which there is no evidence.

as for your other comments, they clear indicate that you are grossly misinformed about the evidence for evolution, the fossil record and geology.

perhaps it is you who is trying to consider things deeply, but are still very confused and ill-informed at this point in your life?

First of all, you're jumping in the middle of a discussion, and you're taking my comments out of context...so, if you want to be involved and reason together, then please keep it on a level that is respectful and does not distort my statements and then call them illogical.

Has scientific calculations shown that there was a beginning point to what we call the universe?

Einstein theorized about it and was proven later...there was a beginning point - which is referred to as the "Big Bang" - which ironically enough was not big and did not make a sound...but I digress....

Now, if there was a BEGINNING POINT, how did it begin?...where did those first elements come from? How could "something" come from "nothing" without a cause?
I'm saying that if something BEGAN to exist...then it must have a cause for its beginning.

Secondly...I'm saying that God exists....before the beginning of the universe - God exists...God exists now and God will exist tomorrow....God did not have a beginning point...God was not created...God does not have a "cause"...grant me this simple point...if we are talking about the most supreme being....then if God had to be created or had a beginning, then what kind of "God" would we have? God exists - always...

Now, how about a reasonable response from you regarding two very legitimate questions....how did those elements come into existence and how, relative to the millions and millions of varous life forms on earth, living in an amazing variety of environments and extremely amazing complexity....how can you explain this amount of life in such a relatively short amount of time?

There is something more behind all this...and deep down, you need to be true to yourself and find out what it is...otherwise you are cheating yourself...and you are too valuable and unique a person to allow that to happen to yourself.