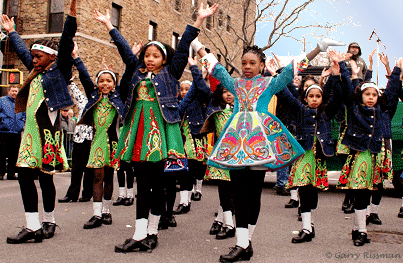 On behalf of the organizers of the inclusive St. Patrick's celebration in New York we are happy to invite you to join our festival on March 1st 2009 in Queens, New York.

Our 2009 St. Pat's For All Parade and Festival extends for a week of community forums, film screenings, local schools concerts of traditional music dance and storytelling. The highlight of our festival will be our 10th Annual Parade and Irish fair on March 1st.

The people in the communities here enjoy the energy and spirit that the St. Pat's For All parade and fair brings to the schools and streets of Sunnyside and Woodside!

As for the past ten years the theme of the 2009 St Patrick's festival is "cherishing all the children of the nation equally". Taken from the proclamation of Easter 1916, it is still meaningful today, 93 years after it was written.

We celebrate Irish heritage and culture. Whether for spiritual quest, banishment, exile, a longing for adventure or in the pursuit of dreams the Irish diaspora have gone from the small isle of Eire to all corners of the globe. So we gather on March 1st in Sunnyside as diverse communities of New Yorkers to celebrate Ireland.

Among the puppeteers, dancers and stilt walkers will be community groups reflecting the ethnic diversity of Queens celebrating Ireland.

Queens NACCP will carry the banner of Frederick Douglas recalling his visit to Ireland during the famine.

The Mexican community honours the San Patricios, Irish immigrants who defended the Mexicans in the U.S. Mexican War of 1846-1848. Others will recall Thomas Charles Wright founder of the Ecuadorian Navy, who hailed from Drogheda, Ireland.

The presence of Choctaw and Shinnecock representatives will reflect the generous outreach in 1847 by native peoples to the starving Irish during the great famine.

Among the sponsors and supporters of the parade are Local 1199, Dignity NY and of course locals who donated time and talent as well as many dollars. The Queens branch of the Red Cross will once again bring tea and hot chocolate for everybody.

Students from TCI will carry giant puppets. The children of the community represented by Irish dancers and boys and girls clubs will lead the parade up the avenue.

Backing for the parade has also come from city unions and labour leaders - LOCAL 1199, the United Federation of Teachers, The Central Labour Council and Local 375 DC 37.

The Irish community of Queens hosts the city's only parade to welcome lesbian and gay contingents. The March 1st parade continues a rare spirit of hospitality and welcome that began with the 2000 parade historical breakthrough.

Community youth groups will join as drummers and puppeteers. We look forward to drawing on your creative community and artistic leadership skills.

We also hope to get you on the airwaves on some of the local and national television and radio stations. We are looking to do a broadcast via the internet so that friends in Ireland and around the world can link up as the celebration takes place.

Or, take the R, V, Q Subways to 36th St (Northern Blvd) and walk from there along 39th St. (Please note: This can be a hike, especially on a cold day).